There were once three mighty city-estates, far to the south.

They were fair Flava Pradej, home to the tailed moglins; glittering Chandrahal, and its sharp-eared elves; and everbright Timbala, with its cunning hamen. But when the Emperor of Woe arose in Chandrahal, they launched an unprovoked attack upon Flava Pradej— an arcane curse which spread far beyond its intended target, spelling dire consequences for the world as it was known. Flava Pradej was no more, and Chandrahal collapsed under the weight of its own crime.

By the skin of its teeth, Timbala held out. Bringing all the wisdom and might of its artificers to bear, they shored themselves up against the oncoming blight, building wonders and marvels far beyond the ken of their peers. But they were fighting a losing battle, and eventually Timbala, too, was left behind to gather dust— its children scattering, its knowledge fading. But its marvels were left behind to whoever may find them— and after 1500 years, surely the dread curse has run its course?

Paru is a young lady of high pedigree in the small but prosperous kingdom of Galeport. Her parents both claim descendance from Timbalan royalty, a claim proven true when she was born with the Timbalan Marks— evidence of her compatibility with their fabled Sigils, highly sought-after artifacts of power. Having such potential within her, Paru disdains of life as a pampered socialite; she sets out to find the land of her ancestors, gathering both sigils and companions along the way.

The Path To Timbala is a fantasy comic written and illustrated by Elanor Pam and edited by M. Rhys Bail, launched on July 15, 2019.

About the Author & Artist 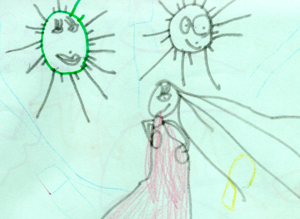 3-year-old Elanor Pam was once doodling on the kitchen floor when she glanced up at her mother and had a sudden epiphany: from the back, long hair actually covered the entire head and neck. Two lines around a circle would not do— Portrait of Mother Washing the Dishes required many, many more lines, superimposed and close together. Thus she embarked on her artistic journey, to the dismay of her parents.

Born in 1985, she graduated as a traditional printmaker, the coolest but most useless diploma one can get among the arts. Sometime in the 2000s, she came up with a comic called Sinful, which revolved around a demon posing as a human in a vaguely medieval village. It enjoyed discouraging levels of popularity. Roughly the opposite of emboldened, she penned a secondary project, a proof-of concept chapter named God of Destruction, about the mostly peaceful reincarnation of said god being pursued by a violent cult of old white businessmen. It immediately attracted an engaged readership on webcomic platform DrunkDuck. Faced with a conundrum, she focused on the latter, pantsying a plot, and sporadically updated the former. This state of affairs would continue until she was clotheslined by an acute depressive episode.

After some soul-searching, therapy, and sertralin, she resolved to shelve her older projects and commit to a new, wholly pre-planned project with a full outline, lore and character profiles, clearly delineated arcs and an ending. Thus was born the project you see today: The Path to Timbala, an epic tale of ancient kingdoms, spelunking gay princesses, and angry sheep.